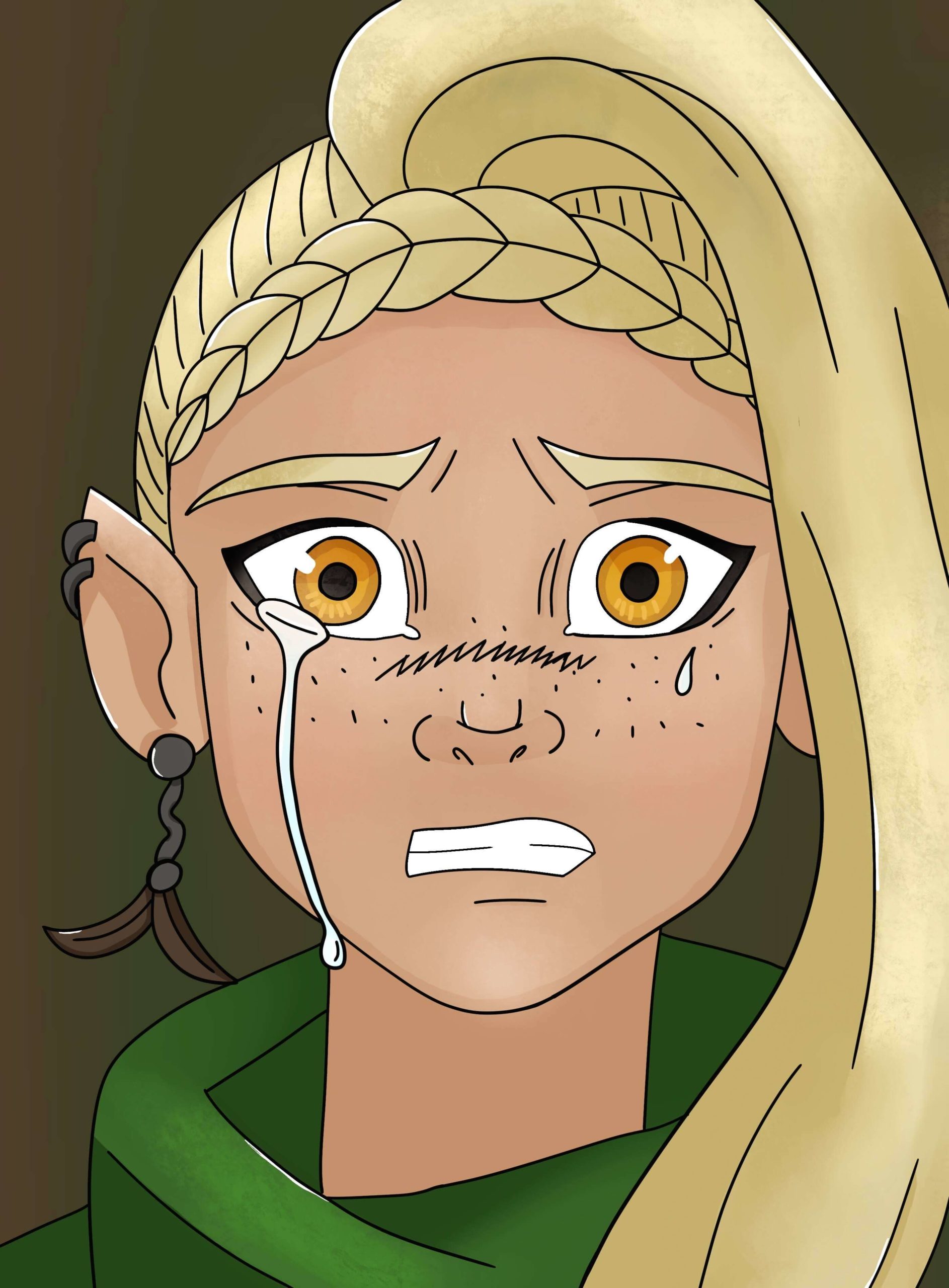 We make our way down the tunnel and I find Uncle Carson. He asks who I am but I suggest we return to that conversation at a later date when we aren’t running from trolls as it’s kind of hard to explain. He agrees.

I help a young girl through the tunnel. She tugs at my owl feathers and I give a small hoot in response. She giggles.

I thank the others for their help, but then quickly explain we’ll loop back later to the topic when Valdrin asks if these are my people.

We make it to what will become our underground campsite. Carson seems to be an advisor, and later I learn that he is “The Voice” of the clan. He speaks with two others: a dark skinned halfling with tatoos who’s the clan healer – Pimrim Daycrest, and an older white haired woman with thick braids and face tattoos who’s the Moon Whisperer  – Salna Silentward.

I learn that those two are the left and right hand of the chief.

Carson gives a little speech about how they need to move on. Things are scattered and they need to get the word out. They have a few places they could go, but they should start by moving north at least. There are settlements that way they can trade at. They aren’t sure what caused the invasion by the Red Fangs, but they should probably also warn the other clans they are leaving (Swiftway and Rumblebroom are the other nearby clans).

He mentions that my Dad, Midnight Brightmoon, ran off looking for me. My mother Selina (who is a Pathfinder) was with him. They went north. Carson also mentioned that he was weakened by some kind of sickness or malady the night of the attack.

I talk with the others and try to explain that we are in my past. Like I saw me…as like a 7 year old girl. We try to discuss the ramifications of our actions and if they can cause changes. They ask me if I can remember Wind and so I sit down and try to think about it. I can remember taller people, with fur, and maybe one of them was helping, but all I really remember is my mother that night.

When I snap out of my meditation, Wind & Surge are returning to our little group. He had gone off to talk to Pimrim and Salna, and Wind had talked to this little girl across the cavern that she tells me is glaring at me because of the sword. And that she is my older sister – Delilah.

I don’t even remember her but my heart tugs. I have a sister.

We then discuss the sword. I had wanted to give it back to my father personally, but they suggest I return it now. I walk to Carson to give it to him, but Salna steps in my path. She leans up and kisses my forehead and says that she’s happy to see the person I’ve become. And she calls me Midna.

I’m left dumbfounded and speechless. But she recognized me. It feels good to discuss it with someone. I explain a bit about the time hopping and how I don’t have much time. She tries to follow what I’m saying…but it’s confusing. I also mention the curses and how I shouldn’t look this way but have had a bit of bad luck lately.

I also explain how I want to find them later. And she says that they are going to Gulthmere Foret next. Her circle – the Moon Whisperers – reside there. So I should check there…once I’m back in my time that is. The Forest is by the Sea of the Fallen Stars.

And we talk a little bit about the sword. And the more I think about it, the more I start to worry that my Dad will need it during the next 15 years. What if I take it and die and the sword is lost? She mentions that the other Brightmoons – my aunt and my sister – are kind of too frazzled and too little to take it. I now realize thinking back that she wanted me to take it. And I probably should have kept it. Knowing what I know now.

But I end up giving it to Uncle Carson to keep safe for my father.

She then says that she can take care of my curses and that it’s time to receive Selune’s blessing – to embrace what it means to be a Brightmoon. She sends me into the water in the cavern and removes the curses. My vision darkens and I return to my normal size.

She then begins to sing and a shaft of moonlight hits the water around us. The song is a combination of celestial, sylvan, and halfing. She’s calling upon the Goddess of the Moon to grant the blessing to the inheritor of the Brightmoon clan.

I look up but instead of a ceiling I see a full moon against a dark sky. I hear a voice that asks if I accept the blessing. If I will go out and find the path and help others. That’s all I’ve ever wanted…of course. It is who I am. What I’ve been trained to do. Then a figure emerges from the moon. It’s a woman who is hard to describe but beautiful still. She leans down and kisses my forehead.

Upon snapping out of it, my eyes have darkened to a deep golden amber, like a wolf’s. And my teeth have elongated. I can also see now in the dark and my sense of smell seems to be heightened.

Salna tells me I am now one of Selune’s chosen. I have questions, but I can’t do much after the ritual except sleep.

In the morning, it’s clear Carson has taken on the leadership position. Did I make the right choice?

He asks us to cover their tracks as they move out. I also worry about my parents and wonder if we should go after them. But I decide to help the clan. I think that’s what my father would have wanted.

He asks for my name, and I stumble a bit. I can’t use my real one…so I tell him to call me “the monk.”

Then we head out. We hang a little bit behind and Wind starts to cover the tracks but notices a claw mark on a tree after a couple of hours. A troll. We race forward and hear sounds of battle in the distance.

Then our crystals start to blink. I rush down a steep, bramble covered hill with Surge and see that head gnoll and a troll with Delilah in his claw. He’s asking her where the sword is. They’re after the sword. It would have been safer with me.

I rush in and try to take out the mage but he shrugs off what would have been a stunning blow. I tell him to leave them alone, that I know where the sword is.

Surge turns the ground to mud but I sink into it as well.

Then the head gnoll says not to make a hostile move or else he’ll command the troll to bash the girl’s head in. I stand my ground wanting to negotiate.

But then hell breaks loose. Surge polymorphs the troll and the others take out the head gnoll. But before we can get my sister free, the troll sticks her body in its mouth. He threatens to bite down, and does so after Valdrin peppers him with an arrow.

The blood hits my face and I can see the life instantly rush out of her body. I steel myself and take out the troll, shoving a bottle of artificer’s fire down its gullet.

I cradle the pieces of her, and then reach for my crystal; and for a moment I think about how I’ve been saving it. For myself. For maybe the others. But for mostly myself really. For how I could die at any moment in this existence, how I almost die all the time. How it’s made me braver, knowing I had it in my pocket. And for a second I ask myself if I would die for my family, for my people. To give them a chance to survive. Even if I haven’t seen them in 15 years.

The answer is yes.

And so I bring her back.

She’s wounded. Hurt badly. Wind helps her. But she’s a bit dazed. The crystals blink faster. I tell her she needs to find Salna. She needs to stay safe. She’s scared and asks me to go with her. But I can’t. And it fucking kills me.

But I remind her, “You’re a Brightmoon, you’re so brave.”

And then I’m gone.

We’re back in the void, and the Master’s voice seems stuck in a loop: “coming back…found you…almost…hold…”

But I’m having a hard time focusing. Staring at the blood on my hands. Questioning everything.

This site uses Akismet to reduce spam. Learn how your comment data is processed.